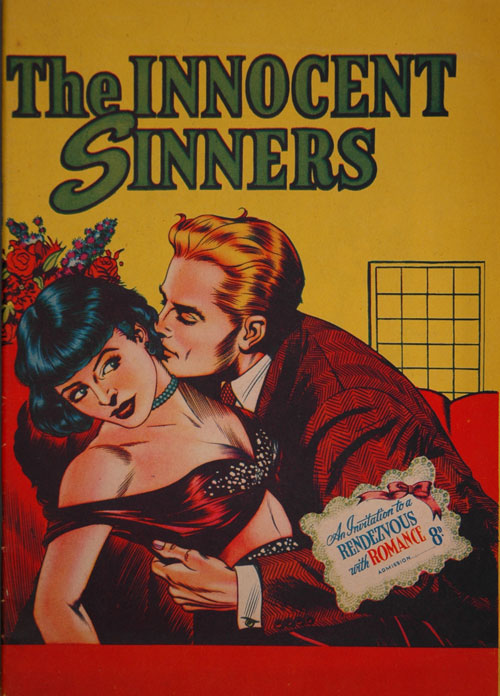 “ I can’t stop now!” she gasped a passionate moan as her arms reached for him..”I’ve desired you for too many nights.”

He responded huskily, his taut, muscular arms embracing her and driving out all resistance. It was as if some strange, torrid tempest had suddenly descended down on to their bodies as they struggled to out-do one another in the removal of their clothing. He grasped her in his arms and lifted her clear of the carpet, his lips parted and he moaned as he buried his face in her soft, ample, velvet-like breasts.

“Ohh. Brendon !”,she cried, surrendering her body to his firm, impatient, maleness.”Hold me”, she quivered.

Sergeant Tom Flannigan closed the book with a wince and a sad hiss of breath. Distracted by a sudden rising of the wind in the mallee trees outside, he gazed in silent contemplation at raindrops streaking against the window.

“Right on time,” he mumbled to himself. He was referring to those first good rains of the season. ”Tim’ll be glad he finished seedin’ this mornin’ “.

His gaze moved from the window back to the book on the desk in front of him. He picked it up wearily and slipped it into an opaque, plastic bag that contained five similar paperbacks. He then folded the top over and sealed it with three staples and labeled it :

Tom Flannigan read back over the label, he snorted when he came to Sr. Mary Margaret’s status in this small country town and spoke out loud..;

He rose and with an angry tug on a hanging string, extinguished the light. The police station at West Waylong was a residential, so the distance between work and home was the thickness of a door jamb.

Tom Flannigan was one of those few who could leave their work worries behind them at closing time, besides, Tom had his own worries, for several days now, he had put off writing a reply to his fiancé, not for nothing to write about, but rather, (as she had complained of a “cold, distant feel ” in his correspondence),because of a forlorn search for a more passionate wording of his feelings toward her in his letters.

Although this was the second time around in the marriage game for Tom, it was no easier for him to overcome that word-block of emotional and verbal commitment demanded by women from their suitors! Tom scratched behind his ear as he jiggled the eggs and bacon in the pan..; what to say, what to say;

“I do love you Beth’ with all my heart!” he mumbled such clumsy sentences to himself as he completed cooking his evening meal and crossed to the table. He placed the plate on the table, and after a moments hesitation , decided that the eggs and bacon needed a bit of a “lift”…he took a small tin of baked beans from a cupboard and added it’s contents to the bacon and eggs, speaking theatrically as he did so…

So you can see, Tom. Flannigan had his mind full of that awful doubt that trips and tangles the lovelorn. Added to this was the fact that his future bride had no intention of ever…ever living in such a distant , lonely town like West Waylong! ….

So he had no thought to ponder on why a respectable, well-educated person like Sr. Mary Margaret would steal tacky romances of pulp-fiction. There were laws in place to govern the prosecution of criminal actions and his was the task to follow those laws through.

Rule# 1 : Never confuse the laws of state with the laws of sentiment. In the morning ,Tom Flannigan would transpose the interview he had with Sr. Margaret from tape to document and pass it on to headquarters for its consideration. As far as he was concerned ; the end of the story….

I ask: “Were you in the Criterion Book Shop last Friday afternoon?”

Fr. McCarthy. “You answer the questions as best you feel ,Sister.”

Sr. Margaret. “Thank you for that valuable advice Dennis,….to your question , Sgt, : Yes, I was there.”

I ask. “While you were there, did you pick up this book? ( shown paperback).title: “The Last Lingering Kiss”?

I ask. “You were then seen to place this book in your bag and walk out of the shop….Did you deliberately intend to steal it?”

Fr. McC. “Now Sister, keep in mind you have not yet been charged with any misdemeanor. so you don’t…Sgt, (He confided) I’ve had a call from Monsignor, He has suggested, not without a considerable amount of thought on the subject… keeping in mind the age of Sister and that troubling time of life for women of that age, maybe (he glances to Sr. M.) a touch of kleptomania brought on by the stress of menopause?”

Sr. M. “I’d rather retain what little dignity I have left than to respond to ..to Monsignor’s …er, suggestion.” (she crosses hands on top of desk).

I ask. “Then I’ll ask again….did you intend to steal the book?”

I ask. “These other books were voluntarily given in by you….did you intend to steal these also?”

Sr. M. “Because Dennis , of a reason I very much doubt you would understand! neither you nor the Monsignor!”

Fr. McC. “It goes beyond all rational thought, Sister, that you, in particular, could have the slightest interest in these…these trashy productions!”

I ask: “Fr. McCarthy, I am at this time trying to establish the plea of the accused, I am not looking for whys and wherefores…Do you Sr. Margaret, admit to the theft of the aforementioned books?”

Fr. McC. “You do realise, Sister, where this places us, the church, in the eyes of the community?”

Sr. M. (heatedly)” Oh damn the community!….( Fr. McCarthy leaps to his feet) and damn you Dennis and damn the Monsignor and double damn the damn Church!”

Fr. McC. “Are you gone mad ,Sister, are you mad?”(I grasp Fr. McCarthy by the arm and sit him back down).

I ask. “I must ask you , Fr. to restrain yourself, you are here only as a supporting representative of the diocese so please restrict your comments to that role….and I remind you, Sister, that all you say can and will be considered as evidence…”

Sr. M. ”Oh shut up Tom!…(She stands with fists pressed on table )and you Dennis!….both of you….shut up!…Are you blind? can’t you see we are all of us here in the same situation? (Fr. McC and I remain silent)..All obliged to serve an institution….an unforgiving, blind institution!…and..and a so called infernal “COMMUNITY!” that denies us any right to a life of our own..no!, don’t you interrupt me Tom Flannigan, I know all about your last marriage, you lost that because of the hours you spent on the job rather than with your family. The police force demanded it. The community demanded it  and you ,Dennis, how many more years before the bottle claims your soul?…ah! don’t deny it, I know you only too well.. it’s written all through your eyes.. and those “Holidays” to dry out down by the coast..We’re all three of us damned to play a set-piece for the Community, the Law and the Church. (she sits wearily down)…Oh how I longed desperately to be able to go home at night sometimes to children of my own…a man! …of my own, be him hopeless, be him ugly , but be him human…just human… rather than the dried out wafflings of the writings of a “holy book”!…(she pauses, stares blankly ahead, speaks quietly, slowly) do you have any idea how empty a sound, is the parched, crisp, turning of the pages of a prayer book in the quiet of an evening always alone?
The three of us have committed social crimes here, only my crime is more visible….I haven’t neglected a family, nor tippled with the altar-wine…I am guilty of a crime of passion….I have tried to steal a modicum of illusion of fantasy….of lust with a man.”

(there is a moments silence as we gathered our thoughts)

Sr. M. (sighs, leans back in the chair )”Looking back on it, I could say I don’t know..the first one was an accident…I slipped it into my bag absent mindedly as I picked up another thing I wanted to buy…but when I discovered the error later, I stayed silent..why?..; a kleptomaniac impulse….a thrill? no, not a thrill I think rather, it was a part of the desire, to steal a moment of lust, an integral component of the hunger…a hunger for the love I did not have…I believe as we grow from the child to the adult, each of us seeks that love..that particular love, most denied…perhaps we are all assigned a set amount of little crimes in this life…alongside our everyday duties, little grubby crimes, along with the humdrum of responsibility and rules..and when we step outside of that regular pattern into the more shady area of our deeds, we must accept a completely different set of rules..”Oh what wicked webs we weave…”(a bitter laugh)….I fought with myself for years against the desires…like you, Dennis with the bottle..and you Tom with the duties of the police officer in a little country town but when can one stop?…can one stave off forever the natural impulse to drop the facade of religion. of law and order?…some can…I couldn’t…anymore…I desired a passionate embrace from a man (she leans forward over the table and speaks slowly)Gentlemen,…I too, wanted a moment of being desired!..how I envied Magdalene her Christ.. and these trashy books were as close as I was going to come to it in this God-forsaken place!…in this God-forsaken church in my own human forsaken life!”

(The three of us sit silently staring ).

Tom Flannigan glanced up from his desk in the office to meet the eyes of Sister Mary Margaret. He stood to receive her proffered hand. She was leaving the district.

“Thanks sister…thank you and yourself.” he fumbled with the biro in his hand ,then dropped it casually on the table. “What…what will happen to you?” he asked

“Oh,…it’s a big institution; the church…I’ll be swallowed up in it somewhere after a little penance….I’ll become anonymous once again.. slowly ,I trust, the desire for the human touch will be “cleansed” from my soul.. like Dennis’s liver..( another chuckle)….and you ,Tom.?”

“Me!…oh, I’ll just….just carry on as usual I ‘spose.. hmm…. look, Sister, I know they are going to prosecute this case in the city, so I won’t be seeing you again….I want you to know that I erased that last part of the interview the three of us had I didn’t see it as relevant to the case and I don’t suppose it would have interested the people at headquarters ”

“Yes, I expect you are right, Tom, there are some aspects of the lives of our community leaders that are best left in illusion (she chuckled again)..a bit like a trashy romance.”