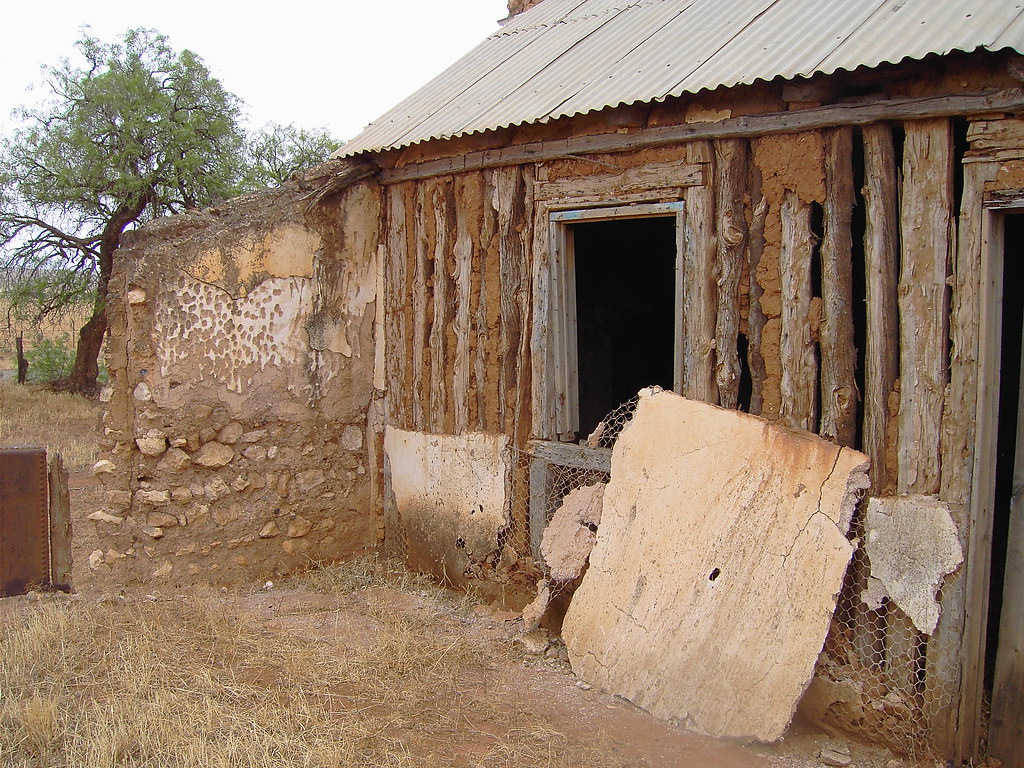 So I drive to the town, pick up a few groceries, check the mail, chat a while..a bit of goss..a bit of this an’ that and then hit the road to home again…and that is where the haunting starts.

You’ve seen them, as you drive along the main roads and the back roads…sunlight slanting off white sepulchre…you catch fleeting glimpses of them through the trees…deep in the scrub, sometimes almost complete, sometimes but a shadow of their former glory…….you can sometimes drive past them for years before you suddenly realise they are there and then you get a shock at their “sudden appearance”..: ruins of old cottages and huts…scattered, crumbling ruins…sad testament to optimistic aspirations.

Road-kill bared to the open sky.

The windmill there clunks and sighs,

The windmill beside where it lies.

Golden wheat on the paddock rise,

Dust upon dust blinds the eyes,

And pummels the cloth of countryside.

The mill that groans.

That leads the eye on and on,

And on under an aching, searing sun,

From an empty soul all forlorn,

With regret of the place to which he is born.

Mostly we drive on…just giving an acknowledged glance to these pieces of jaded history…someone else’s tribulations, another’s history. I have stopped at several of these sites…joined in a pagan-like offering to another’s story…tossed a pebble or two into the underground tank out the back. I’ve stood for a moment in the remains of a back door opening, silent, wondering on the view they must have seen from that same place, another time…a time which may move inexorably on, yet the human condition remains.

Who were these intrepid builders? What singular ambition drove them to sculpture out of rough earth and stone, from memory and trial and error these testaments to a hopeful dream? They haunt me, these vacant souls…shuffling through sad ruins, backing onto abandoned fields that once must have swayed wave-like with fronds of wheat or oats. Now, scavenging crows pick nastily at an obscure morsel and a cruel sun rakes it’s talons over old wounds.

You can stand, transfixed,

For as long as you can bear.

Staring at the thistle flower,

A spot of yellow bliss in an ocean of dust.

The sun beating down on your back,

A thunderous beat as heavy

As the lumbering speech of a stupid man.

The only bright bristle ,

In a field so barren,

Is that one yellow flower of the courageous thistle,

Pleading for it’s life to the open sky,

And I wonder and wonder..for the life of I.

There are stories out there, hovering around these ghosts of the past. An entire population of early settlers with their children and animals, gone now, the only memory in some cases being a headstone or two marking a seriously foreshortened life and along with such disaster the presumed tragedy for the rest of the family, having to absorb the sadness into their hearts. When one scans the landscape of those long-ago years, the inevitable hardship and difficulties faced, one gets the feeling their lives were dominated by the practical demands of weights and measures, time and distance. The burden of necessity, always the prime consideration of their immediate attention.

Strangely, the history of these ruins seem to be shrouded in mystery…few if any people living now have knowledge of the folk who built and lived in many of these ruins. Their short moments of occupation at odds to the effort it must have taken to erect such structures. It is as if strangers to us all had swept fleetingly through the land, leaving no word or lasting deed of their presence save these crumbling hovels. One wonders what the indigenous peoples would have made of these pioneers, struggling with stone and beast, fire and plough to make a meal for their family when food was in abundance all around!…….madness, surely!

Lament for what you have to abide.

Born to us a gift supreme, sight sublime,

Beauty’s hand to hand in mine,

But now I turn mine eyes askine,

Now in shame and guilt decline

To walk hand with hand in thine.

Whilst fair Beauty and her entourage

And ponder I, why ‘tis always encouraged,

That we pluck the prettiest flowers,

But leave the weeds to flourish..

But it is the history that haunts me, for it is there, fixed in stone as solid as any Roman effigy, though perhaps not as romantic! But then THAT would depend on the story and the rumour of salacious intrigues! It seems a pity we can stand where they once stood, feel the heat and wind which they once felt and imagine the sweat and toil they once gave to a land and ambition that both their ghosts and our living spirit still share, yet not know their name.

What is its name?

Who is it holds the candle,

Who will ignite the flame?

When we call to that God on high,

What will be its name?

When we strive for God’s glory,

What reason is to blame?

What went so far awry,

When we struck the home with flame?

Who will command cruel deed,

When God cries out their names?

What excuse will we allow ourselves,

When we lay them in their graves?

When all is done and dusted,

Who will kill the flame?

Who are these wonderful Gods,

Would have such things done in their name?

Well, this person must goest to sleep, and I suggest you do likewise..so it’s goodnight from me to goodnight to thee…