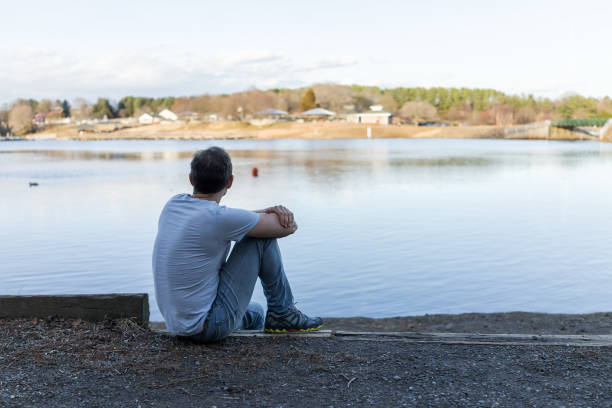 . . . And the afternoon sun illuminated the panorama with dazzling glare so that the sea, with its distant choppy water flashed a glitter reflected off the waves. There were trees out the front of the hotel over the road, big trees, shrubs and bushes, the tops of the tall trees hidden from view by the edge of the roof from the fascia up with leaves hung in long hanging fronds down the trunk and out a little, dangling heavy like those big gum leaves do, the palm trees swirled a little with the slight breeze that had whipped up from the north across the backwater swamp.

The beach sand a muddy colour with the tide right out and a couple of kids throwing handfuls of the stuff at each other down by the creek, laughing and running away with a quick glance over the shoulder at his chaser, their laughter a stabbing staccato, rattling across in the heat from a distance.

Two of the few “long-grassmen” that lived down by the make-shift shelters next to the beach crossed the road, their hair lank and greasy, the same could be said for their shreds of clothing.

“You could be worse you know” the friend said, “You could end up like those”.

“At the way I’m going I’ll be worse than those” the man answered. He picked up his beer and had a sip. They sat quietly for a while, and one fiddled with his beer glass, the kids swimming now down across the creek, splashing and ducking each other , childish squeals between the silences of the hubbub of the hotel bar behind them.

“Have you told her then?” the friend asked.

“No, I’ve been sort of putting it off on the chance of an improvement”. He winced and sipped.

“That won’t help you know’, the friend motioned to the beer.

“Why? It would be better to leave it alone..well..at least until they finish the treatment?”

“I know, I know.. but if I don’t get sozzled these nights, I’ll have no excuse for not doing it.”

“Oh come on, she must think there’s something wrong if you come home drunk every night?”

His friend grunted. A waitress come to the table, picked up the empty glasses and wiped the table top down with a damp rag.

“And how are you gentlemen today?” she spoke as she wiped.

“That’s the way to be,” and she smiled a little smile..”No good being crook in this sort of weather.” The men just grunted. The waitress went on to the next table.

“I’m beginning to think no girls are nice.”

“You just picked the wrong one that night.”

A fisherman steered his dinghy up the small creek, water slipping off the bow and fanning out in ripples behind, the man standing erect in the boat with tiller in hand. He gave a little wave to the excited kids running along the bank. His progress tracked by flashes of boat and man between thick green bushes and trees, going to his moorings.

The man brought his fist down firmly but quietly on the table, his face twisted in bitter frustration.

He wiped his hand over his face, then dabbled his finger in the condensation made by the drink.

“I know I’ve been a fool, but then I wanted it, for some strange fucking reason I needed it more than ever that night, after all”( he did a quick movement with his finger in the liquid )”I’d just become a father then…and it’s been so long.” He had a quick draw at the beer as if to wash the weak excuse of words away.

“How in heavens name do you put her off?”

“Well, its (let me see) about two months now since little Pauline arrived, and I’ve been saying that we ought to be careful cause it might not be best to start just yet, give it another coupla’ weeks. And then you know she’s not supposed to go back on the pill just yet, so I’ve used that as a backup. And now I’ve got on to this drinking thing.” Here he reflected a little. “Trouble is she’s starting to blame herself for my not being able to get it up. She thinks it was all those months of confinement that bought it round..Shit, shit, shit.”

“Why don’t you come right out and tell her?”

“No!” He looked shocked “Hell no! she’d leave me, by Christ, she’d leave me quick, it’s one thing we got, or HAD between us; trust..no she’d just give up and go.” He looked suspiciously at the friend. “You won’t tell anyone else about this will you?..You better not.”

The friend was shaking his head quickly..

They sat quiet again for a little. The friend stood up.

“Yeah, listen..I hope this works out for you…”

“Yeah, thanks” The man smiled weakly. the other smiled back. He tried a joke.

“Just watch out all this pissing on doesn’t develop into a drinking problem.” They both chuckled a little and the friend walked away. The man finished his beer, walked over to the bar got another and went back to his table. He stretched his legs out in front and clenched his hands behind his head. He just stared out to sea.

“Damn that bitch,” he thought “and she looked so clean..that’s the trouble, who’d have thought that a quickie in the car-park could cause all this. Bugger it, I just hope those damn doctors can fix it soon as…”

He sat there staring out to sea.

The kids had gone home. The leaves of the eucalyptus trees had come to life a little with the coolness of the evening, while the tide crept stealthily over the brown sand and up the  running water of the creek, the big gums threw soft shadows crookedly over the bonnets of parked cars.