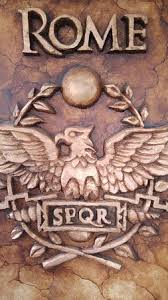 The sun may have set on the British Empire, but Imperial Rome is very much alive and kicking!…even if only within the precincts of the “Commune di Roma..S.P.Q.R.” and while it is true, Christians were never really torn apart by lions in the Coliseum, and the only cries you will hear in anger in that mighty edifice are from the wild banner-waving protesters whistling and sloganeering their noisy way down the Via di San Gregorio outside! If you want to see the Christians skun alive in these times you can view the grisly scene in any one of the “God” shops in the streets leading to St. Peter’s Cathedral. In such shops there is no end of gaudy “memorabilia” to embrace to the heaving bosom of religious fevour! There is even (so I was informed by my “born-again” brother) a 3D picture of ;

“Rubbish!” I said “One could expect as much from a bitter ex-catholic”.

“I’m telling you I saw it!…blasphemy utter blasphemy!” …I checked..he was right!..you know those gaudy 3D. pics where if you turn the frame this way then that…But then again, blasphemy and sanctimonious preaching do go fist in glove, and I recall a piece of graffiti minutely scrawled (as if ashamed of its truth) on a wall of the eastern gate to the Vatican-“God is an Atheist”, placed there, no doubt, by one of the many pilgrims to this mightiest of sculptures dedicated to (another one!) of the “mightiest of worshiped Deities”.

But then, one doesn’t go to look at Rome…Rome bows not her neck to the tourist yoke, Rome doesn’t paint its “face” up for the “season” nor are its folk encouraged to “behave” for the tourist dollars! You don’t go to gaze at Rome, rather, Rome gazes at you…and that with a very critical eye!…Well could the poet Shelly, have directed his famous line to her: “Gaze upon my works ye mighty and weep!”, for there is barely a square foot in that old city that doesn’t ooze or rather, weep, history AND art….not a dry, musty history, like Egypt. nor an exotic “distant” history as in China…rather, the history of Roma, is an earthy, dirty, sweaty, passionate drama that embraces every vice and heroic gesture of mankind and sculptured within those magnificent artifices is the art itself…so powerful in it’s prescence, so magnificent in it’s volume, it yields its power of presentation to no single entity..not even to the Gods themselves! To walk through the gigantic bronze doors of the Pantheon is to walk into the wonder and awe of human ingenuity.

A stroll down the Via del Corso,is a must, with its extraordinary denizens and superb buildings and crazy kids on their crazy scooters demonically driven over any available space (including your toes if you are not fast enough!). Those understated signs casually pointing to such gems as ; “Fontana di Trevi”, “Piazza di Spagna”, ”Pantheon” and not at all least : “Il Colosseo.” and the noise!, the noise! wonderful! wonderful!

If the visit to Rome is the baptism then Naples must be the confirmation’- the confirming of Italy as the continuing party of Europe! The government of Italy is missing a grand opportunity to make millions ,with the simple erection of a viewing platform up on the statue of Giuseppe Garibaldi, Italy could charge foreign driving students for the education of seeing how an uncontrollable, seething mass of machines can disobey every known rule of the road, yet still transport their cargo (apparently unscathed) from one side of that Piazza to the other without the inevitable pile-up that would for sure occur in dear-old-Adelaide, with only a quarter of the traffic and half the driving skills! “See Naples and die” would indeed become a truism if one was placed behind the wheel in such traffic. But surely, one has not lived till one is served a wood-oven-fired pizza accompanied by a stubby of “Peroni” beer, and serenaded with calls and cries of fishmongers and sundry street vendors outside the trattoria window. If one was to cry-“Shuddup!” at the top of your voice, there would be, I’m sure, only the slightest pause (if any) in the general hubbub of activity. One could dress like a king and eat like the same in the city of Naples for a pittance…and indeed, if one believes everything he reads…also die most swiftly if he crosses the wrong people there! Even as I write this, I am wriggling my toes in a pair of exquisite Italian -leather shoes purchased in one of those boisterous markets…the price?..a mere $23.00!!

My last thoughts of Southern Italy are of crisp, blue-sky’d days, lying under some olive trees on the tarpaulin that we used to pick said olives, unwrapping the fresh linen cloths off the plates of home-cured prosciutto, tasting the pale sheep-milk cheese, slicing off a healthy lump of that ciabata-type continental bread and pouring a glass of rich, home-made red wine from the glass-stoppered bottle and remarking to my brother-in-law that ;

“There are people in some countries that would pay for the pleasure of doing this, you know?”

So, in closing, I must remark that if there is a God, and if there is a designed end to the world, and He/She does judge us harshly for our lack of spiritual determination….we can all proudly and collectively point to the art of Italy and cry-