This children’s story has it’s origin in two events. The first was in my wanderings as a much younger man trying my hand at opal mining…not so much mining, really as ; scratching around. In amongst those months of loneliness up in the desert, I had as a “pet” companion, a mouse that I caught one day eating at a packet of biscuits…I named him “Hannibal” and I kept him/ her in my top pocket fed on bits and pieces of crumbs .

The other part is filled by an old miner who lived in a “dugout” hole in the side of a hill a couple of miles away, like the pic below.

He was quite old then and his “dugout” in the hill contained only a big iron-frame bed and one small picture hanging precariously on the cave wall..It was a painting of a sailing clipper-ship that he assured me was the very ship he sailed in to Australia so many years ago. The “dugout” he lived in had a big hole in the roof that with the bright moonlight shining in, would give the super-white alunite walls a kind of blueish-phosphorous glow…quite a sight with he there on the edge of the bed talking of ships and seas while we were both in the middle of a vast desert! 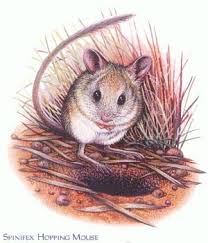 The spinifex hopping mouse, also known as the tarkawara or tarrkawarra, occurs throughout the central and western Australian arid zones, occupying both spinifex-covered sand flats and stabilised sand dunes, and loamy mulga and melaleuca flats.

The Story of Hannibal / Hannibal’s Tale.

When old Charlie took me in as a live-in companion, I was living out in the sticks…most of my life had been a close encounter with the seedy side of life..a pretty hairy existence. So I was quite happy to be nothing more than a “conversation piece” to a lonely old man while I got my room and board , along with regular meals free of charge.

It took me a little while to get used to his house and habits…some of those older folk have habits of doing things that have taken them dozens of years to perfect. But I didn’t mind, he was always quiet in the mornings as he come to the breakfast table…just saying ;“ Hello Hannibal”..that’s the nickname he gave me..He reckoned that anyone as tough and resilient as myself deserved a heroic name! He didn’t really expect too much conversation, and sometimes he would even ask me something and then answer for me as well.

Sometimes he’d take a piece of rock out of his pocket and ask;

“What do you think of that colour, Hannibal?” and he’d answer himself before I even had time to think..” ..well I think it’s nice…a bit on the pale side, but it will scrub up well”.

I think it was just the fact of having some company there that cheered him up, and sometimes we would do things together ..”I want you to stick close to me today , Hannibal..I want you as close as my shirt pocket.”

On some days, he’d take me with him to work..

“Today, Hannibal, we are going to drive a little way along the east ridge..I think we might find some colour there”…and if it wasn’t too much of a tight squeeze on the drive, he’d take me with him for a bit of company, keeping up a running commentary of what he was thinking while he worked. It was often quite entertaining and I didn’t have to contribute to the work or the conversation at all as he told story after story…he didn’t even expect me to laugh..  though they could be sort of funny at times, I think he would have been shocked if I did laugh!

At night, he would cook up a nice little dinner and I would get my meal from the best bits…with all the trimmings of a yeast bun dessert, or a biscuit .

At bed-time he would see me to my room with his “Tilley lantern” , and make sure I was safe and comfortable for the night before going to his own bedroom…all in all, it was a very nice billet for the several months I was with him.

Eventually though, he had to let me go..I am afraid some of my nocturnal adventures had got the better of me and I came home with my three tiny babies…and he had to rename me ; “Hannibelle”. Old Charlie said he was too old now for the pitter-patter of little feet, and I had to find a place of my own.

He read out a letter his sister wrote to him to say she too had; “… found another nice “home” that HE could go into when he was ready..after all, he wasn’t getting any younger..” and he sighed and shook his head .

Old Charlie has since left the district to go to another mining town , because that was his life ; he was an opal miner you see?..and he had to let me go my own way..after all, he couldn’t be expected to take a Spinifex hopping mouse and all her offspring with him in the inside pocket of his old jacket, could he? 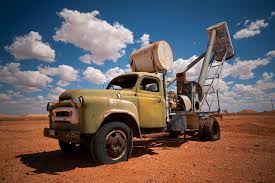 8 thoughts on “The Story of Hannibal / Hannibal’s Tale.”