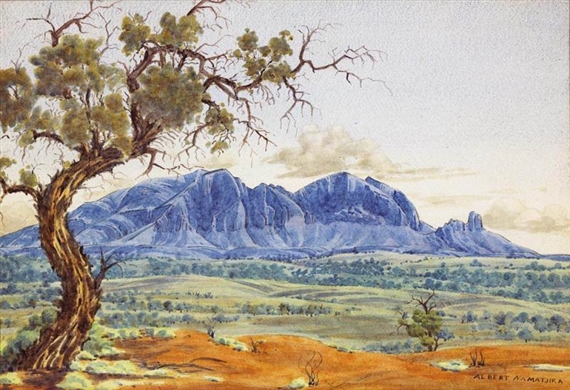 I read of this incident, one of many, in a biography of Albert Namatjira  called “Namatjira ;Wanderer Between Two Worlds”, by Joyce Batty.

If ever you want to read a matter of fact account of simply appalling , disgusting, vile racism that can ever be afflicted upon and to deliberately destroy a fine spirit and an artistic genius, then the understated outrage inflicted upon Albert Namatjira  carefully written in that book will serve you well.

It was a moment of absolute disgust , the manner in which he and his family were treated, as the indigenous are still now being treated. Will we ever see an end to this behaviour?

Of course, she had been keeping a keen eye out for him.

Jean Littlemore was the wife of the bank manager. She was a woman voluntarily trapped into that facile world of “social responsibility”, of contrived behaviour moulded by an invisible force into “correct” mannerisms. Though she had a sensitive side, it was a side almost, but not quite, defeated. She had just that week returned from Adelaide to The Alice on a visit to that southern metropolis of societal bondage and while there, had gone to an exhibition of Albert Namatjira’s paintings..now she wanted one. Many of her friends (or at least those that mattered) had one of those curios..one of those transitions between two cultures, called ( for want of a finer spirituality)”Water-colours by ; Albert Namatjira.” Jean wanted an original Albert Namatjira water-colour.

She had remarked while mingling with her entourage in Adelaide that;

Why yes, she had seen Albert Namatjira many times wandering around the town…and though she had never before had call to speak to him (perish the thought!) in the street, she might now “commission” him to do a painting for her.

“Albert!” she called again, her gloved hand holding a delicate balance on her purse.

“Yes missus?” Albert tipped his hat politely, while his eyes searched her face and demeanor for meanings, for here was “THE bank manager’s wife” accosting him in the street!

“Albert, I saw last week, a painting by you of Mount Sonder. I would like to purchase that painting”. She paused and snapped open her purse and took out a twenty pound note which, Albert intued, must have been put aside for just this action and moment.. “Now, all I am prepared to pay is twenty pounds”.

Jean flourished the note pinched between thumb and index finger as she had been advised ; (“show him cash…they can’t resist cash!..then wave it around a little under his nose”…). Albert remained silent. Staring first at the twenty pounds and then raising his eyes slowly, he looked directly into the bank manager’s wife’s eyes. He held his gaze. Hers answered for a moment , strengthened by the position of her class, but then wavered and dropped and when they rose again to meet his, it was as an equal.

Albert shook his head wearily and sighed. He then spoke to her in his ‘mock-English’ voice;

Albert stopped there. He looked at the woman; she turned her head shamefully aside, her lips pinched together. Albert nodded his head , for here was the weakness in the chain. The Achilles Heel of the colonial white-man, the rock from which they will fall ; insatiable greed!… and failing to attain their desire; a swift descent into begging, for that is the soft underbelly of a haughty middle-class.

Nonetheless, as an individual, Albert could feel for the wretched woman, being fully aware of the structure of white-man’s society, he could see the shame the woman now endured. He could picture the build-up to her approaching him in the street like she did, the desire for a painting, not, as he was aware, for its artistic merit, but for the social status it gave. The contrived “assimilation”, the act of contrition unspoken, undemanded, uncommitted, that was bestowed upon those that “owned” a work by the aboriginal artist, a “veil” which, hung on the wall, would mask the abyss between their world and that of “the others”. It was this sad weakness in her that Albert turned from in sympathy. She touched his sleeve as he turned.

“Albert…Mr Namatjira.” she spoke softly, with a haughty pleading tone…could you then paint me a landscape of the Macdonnell Ranges?”

Albert turned his eyes to where Jean still held his sleeve. Her eyes followed, they both stood transfixed for the moment, then she quickly pulled her hand back to clutch her purse.

“I will,” Albert said, looking into Jean’s eyes, “But I want the money in advance.”

“How much?” Jean asked nervously, “I….I only have..my husband doesn’t think..I…” she ran out of words. Albert stared hard at the woman…one eye flickered a little.

“You what! well there’s twenty pounds (he always used the correct name for currency) gone on a bender for Albert and his tribe!….AND, fat chance of you ever getting a painting from him!” Jean’s husband railed at her when she told him of her purchase.

“If only you’d have consulted me first. I could have arranged…oh….something or other though why you want one of Albert’s paintings I cannot begin to fathom… ”

“The Turnbulls have one.” Jean appealed .

“Likely as not!..they buy any daubing they see. Really, some of the ghastly prints they have..Bob Campbell rejected him, and if he’s not good enough for the National Gallery…”

“Be jiggered!…why, Bob’s on the board of half a dozen respectable companies. He’s a man with impeccable taste….in all things cultured….No. I’d suggest most strongly  you keep a good look-out for your Mr. Namatjira and chivvy him along about your painting or you likely as not can kiss that twenty pounds goodbye!”

Such a ponderous lecture from her husband made Jean worry that she had been a little unwise in trusting Albert. The last thing she would want is to be made to look a fool by a Black…!

“Oh lord! how the tongues would wag!.”

So Jean kept an eye out for Albert and the next time she saw him ,reminded him of her order.

“I’ll bring you the painting,” he promised. “What do you think I am…a bad white man?”

A couple of weeks later, Jean was walking down the street with a close companion, when Albert called her from the other side of the street. He waved and held up a rolled article.

“Oh!” she exclaimed “It’s my painting..yoo hoo!, Albert….over here!…over here! Oh is the man deaf..surely he doesn’t expect me to go running across the street after him now does he? Hoo-oo! Albert!… over here!” and she waved her gloved hand.

Albert stood there. He had one hand in his pocket. He put the rolled painting under that arm and then put his other hand in the other pocket. He stood still where he was. Jean suddenly stopped waving and making noises when she saw this….she was no social slouch. She was well skilled in the art of snubbing. Many a cutting remark had she delivered on cue with devastating effect.

Her companion started prattling on at her elbow. but Jean had no ear for it. She had locked eyes duel-like with a “solid rock” and she knew she would lose!..But how to lose gracefully? How to keep face with her companion : To be seen crossing the street to gratify a Black man. Jean squared her shoulders .

“Oh well,” she heaved a false sigh with just ,she hoped, the right mixture of pique and impatience…”if the mountain won’t come to Mohammed…” and she stepped to cross the road.

“Wait here, Madeline, I’ll just be a minute while I deal with this.”

Albert watched as she crossed the road. It didn’t give him any pleasure to force her hand like this, he was a polite man..but there was something about the way she …she…expected things…and as he watched her arrogant confidence. he realised how terribly ignorant were these merchant people…and what compounded their ignorance was their dull insousiance!