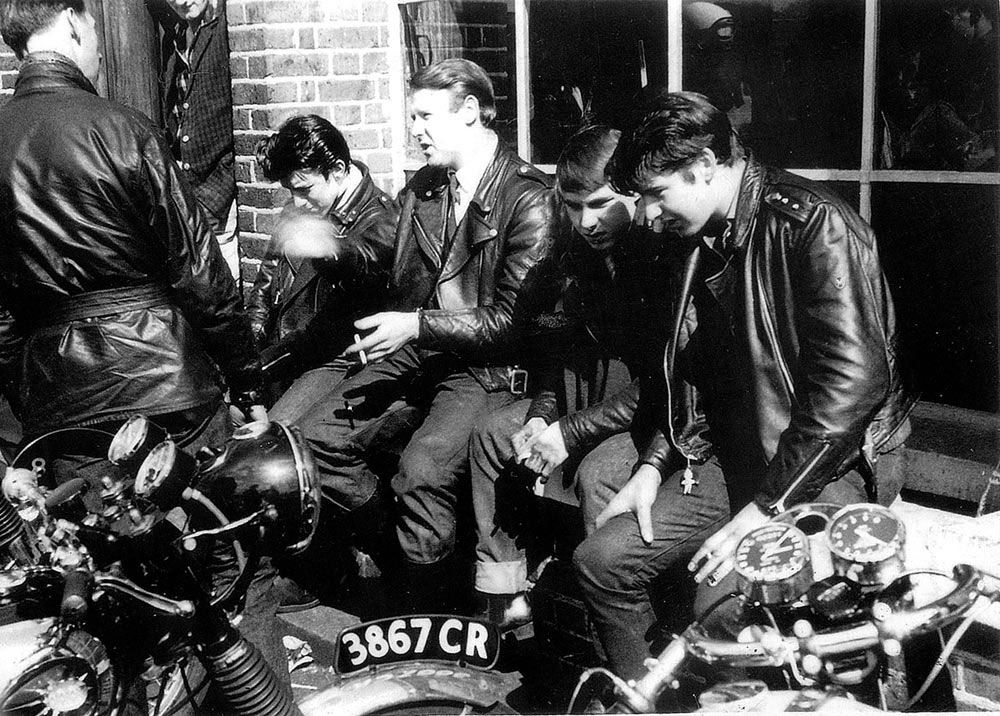 [ I wrote this piece quite a few years ago. It was an attempt to both explain and understand that moment of decision in my late teens, in the later years of the 1960’s when the urge for revolution was so explosive in our Boomer generation. The thing is, while we were full of the life and want for a new social beginning, AND were keen as mustard to get started in it, we really didn’t (or at least ..I..didn’t !) have any flamin’ idea where it was going to take us!..It was one crazy, hell-raising ride into adventure, with not one adult around to give guidance or example..just partying on for years and years!..the old rules were torn up and the new ones had yet to be written..and when they finally were, it was on the shredded shirt-tails of what was then a conservative Australia..
Well..the job was done and still is done and all this old boomer can say is ;
“ Goodbye to all that!”]

An interesting phenomenon can happen to a young person when they reach their mid to late teens, there is a moment of awakening to the situation around them, the life they are living, the social circle and familial surroundings that guide their every-day movements and decisions. They can have a sort of psychological awakening and either fall totally in-line with the accepted dogma of society, or they can totally rebel and reject the “boring-as-batshit” lifestyle of their parents and peers and go off in a completely different direction. Some of the “baby-boomers” famously did just the latter….I was one of those.

Now, let me explain the three different phases of baby-boomers…There are those born directly after the second world war, the more inflexible of these grew up with the mind-set of their parents : Conservative, militaristic, socially servile.

The second wave from the start of the fifties to the middle fifties were expected to follow such sentiments as their older siblings, but they did not..Oh!, they did for a while, as tender youths, but then they rebelled!

The third wave, till the early sixties, are the misguided conservatives we have in power now! They have leap-frogged back to the fifties in a caricature of what they perceive as their parents control mechanisms and are an exaggerated version of that conservatism!…..Hopeless!

I am of the middle set of boomers…and man!…did we ever rebel! It wasn’t just a case of :”Oh, I think I’ll go in a different direction”…It was an emphatic…”I’m outa here!”..and I can remember the exact moment when I stopped being the aspiring apprentice carpenter and became the son from hell!

There were three things that awoke the liberating spirit within me, the first was a book, the second was music and the third that sealed my fate was an incident.

Let me enlighten you.

I was an avid reader of books in my early teens…you probably know the type of books..: Crime, mysteries, war, adventure…that sort of thing…I was a regular “young boys own” kind of fellow, till one day, in the mid sixties or so, whilst about to catch a train, I was looking at a book-stand for something to read, and in a hurry, I bought this book that had on its’ cover a war theme…I bought the book and caught the train….the title of the book : “Catch 22″…I fell in love with that book…I still love it! I’ve consumed it so many times, like one consumes a lover, a hunger insatiable till you next see them! When touching is not enough and total immersion is demanded..a beauty!

In 1967, The Beatles released their “Sgt. Peppers” album…Talk about a bombshell!…Never, never before in the world of music had such a magical mix of bizarre and sublime sounds been cast upon the masses. You cannot honestly tell me that you can listen to that album and not be swept away with the mesmerising musical magic….and that moment when the calliope lilts in “For the Benefit of Mr. Kite”…”…and of course Henry the horse dances the wALTz…”…..glorious! magical!, marvellous! To HELL with Elvis!…and then came Hendrix and The Stones.. who wants the crappy crooners? Just turn up the volume!

The third incident was the defining moment, when the combination of the first two awakenings jelled with the third and I went home to sleep on a new and exciting desire.

Again, it was 1967…the end of that year, I was nearly seventeen…it was Summer…….I don’t suppose the name ; Bodo Skrypek means anything to you? Why should it?…But just roll that name around and off your tongue  a couple of times….obscure? abstract?…..intriguing isn’t it?…But I kid you not..it is a real name. As a matter of fact, he nearly got into a punch-up with a copper one night who thought he was having him on giving a name like that!

Bodo was a “Rocker”….you know?, in the days of Mods and Rockers…Bodo was a Rocker of the first order..The BSA Golden Flash motorcycle, the black leather jacket and chrome chains, black stove-pipe jeans with “ripple-sole” shoes, the tats, the snarl, blonde, “flat-top” haircut and the sartorial exactness of a Jimmy Dean, but with the aggro of “Chopper Reid”, if Chopper was around in those days!

You’d understand what I mean if I tell you that he used to clean his motorcycle, that fetish of masculinity, engine and spokes, with a toothbrush!…that machine was a black and chrome beast, an android extension of his physical personality, he could toss it around like it was a twirl of his fingers. It was totally phallic… Bodo WAS the fifties personified. We adored him…. We feared him!

One summer night, at the top of Brighton Rd., Three of us gathered near “The Monument” ; a column, still there but moved a little to one side of the road, a testament to war. Three of us were there..: Pommy Len with his Honda, Ron Parker with his 350cc. Beeza..and myself, the youngest by a couple of years, with my Yamaha. It was the early days of the emergence of the Japanese motorcycles…themselves a bone of contention amongst the motorcycle purists who mostly scorned the “Jap-crap” for British machines, of which, amongst the Rocker brigade, Triumphs and BSA reigned supreme…Norton was acceptable, but just,: the intellectuals choice…the rest were, in the vernacular of the times..:”poofter bikes”!

We were there, at the S-bend in the road, at the monument, just milling about, dead-still night, nothing to do and no intention of doing it! And then Bodo rolls up on his Golden Flash Beeza…sees us, does a U-ee and pulls up and parks with one automatic quick-flick of the side-stand whilst simultaneously dismounting…He lit up a cigarette…(where did it come from..magic! there it was, the lit match already somersaulting away into the night). He stands, we gather around to the “flame”…moonlight and streetlight phosphorose man and machine, memory fixed to time and place..did I know it was the end of an era…

My senses were alert..I don’t know, something was stirring in me, a portent?..Did we talk? I don’t remember, did we animate? I don’t remember..But next thing, another motorcycle comes around the S-bend and pulls up. I do not know him, but Bodo does..even some sort of respect…he rides a Suzuki “Hustler”, the quickest bike off the mark for those days…his pillion is a blonde girl, long..blonde hair…they are both about eighteen or nineteen, no crash helmet, no shoes, just “T” shirt and casual denim jeans…but maaan!, they looked so cool and relaxed, they didn’t get off the bike, just straddled it and conversed with Bodo, who, after some little time in discussion on the merits of particular motorcycles, tired of the conversation and tried to “hit on” the blonde girl pillion who, with a disdaining toss of her blonde hair, seemed to scorn him!…a new ideal, a new generation!..I saw it, the vulnerability, the loss of attitude….

The young man started the motorcycle and with a casual adieu..and that’s what it was ; an adieu!..They turned and accelerated down Brighton Rd with such amazing speed and unity of line, that even Bodo paused in the action of putting his cigarette to his lips. I Iiked that look of cool denim, the girl, the bike the attitude….an Epiphany! I wanted it!

There seemed like a long, long silence between the departure of those two prophets and any action on our parts…That machine and its’ passengers just went…whoosh, no thundering roar of engine, no aggro from the young man toward Bodo’s attempt on his pillion, just a swift, smooth departure from the point of disturbance toward serenity..the red tail-light a point of distinction fading into the distance.

“I wonder”, said Bodo suddenly,”How fast I can get up to coming down that road?”

He was turned gazing up the new stretch of bitumen of Ocean Boulevarde…None of us commented, it was a rhetorical question, for he had no sooner said it than he had flung his smoke away and mounted his bike and still with the kick-start at the nadir of its stroke, the motor throttling, the side-stand snapped closed as he leapt the bike out onto the road, wheel spinning in a smokey arc while the bike aligned itself to point up the open road.

We three moved our bikes and ourselves down the road a little to where the bend straighten out toward Seacliff. We stood on the edge of the kerb and waited.

You could hear him before you could see him as he came thundering down that boulevarde…that Beeza was screaming, a throaty howl. Christ he was flying!…then he appeared just as the road went into that long, broad sweeping bend of which we were at the zenith. He was already pitched at a low angle as he went into it at a speed of at least a hundred miles an hour….as he floated toward us, the bike howling with a spraying shower of dazzling sparks shooting from the muffler and foot-pedals as they bounced and scraped on the bitumen.

Pommy Len and Parker leapt from the road edge to the back of the footpath….I stayed where I was…I don’t know why, except I was mesmerised in the theatrics of this performance..for that ‘s what it was ; a statement of bravado in the face of  rejection…Bodo had lost face with that girl, with that young man…with us..certainly with me, I wanted nothing of it, no more big-noting, no more aggro, no more warrior tactics….I wanted liberation from that whole social network , screw them all! Though of course, I couldn’t voice those specific thoughts as I stood there rooted defiantly to the kerb. I wasn’t going to respond to the automatic fear….I know now ; with mortality being the only certainty, the whole world runs on bluff.

Sure enough, Bodo swept past so close to me I could smell the engine oil and feel the heat of that motor. He was still braking as he neared the Seacliff junction..but I couldn’t care less, for I had already mounted my Yamaha and was quietly making my way home…I had a lot of thinking to do.

As I lay abed, thinking about that young man and the girl, the fact that they didn’t get upset or angry, they just “walked away”…and that is what I did to that life back then..to my job, to my parents, to my home, to all the expectations of that boring-as-batshit society…it’s what we all did, a whole generation almost, spontaneously, I didn’t get angry, I just..; walked away!